For the first time that anyone can remember there were NO amendments proposed to the Council budget.

Usually, all the political groups in opposition propose amendments to the budget proposed by the councillors who are running the Council. The amendments could be to reduce the council tax rise or / and make changes to the amount of funding spent on different services. So it was very, very unusual that there were no changes proposed this time.

This was not because anyone was happy with the content of the budget proposals. far from it. However, the harsh reality was that there was literally no room for manoeuvre. The picture of the summary page of the budget shows why. 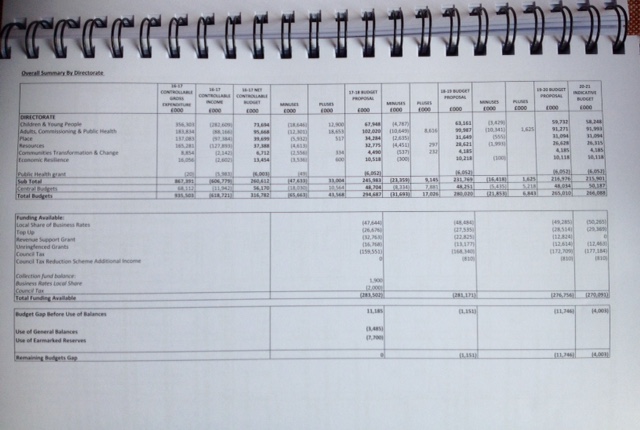 The Council has had its funding cut by Government by £194 million by 2020. And the other main reason for the very large cuts to services is that Kirklees Council gets a VERY poor deal from the Government. The AVERAGE Council in England has £1881 per household to spend on all services including schools. Kirklees has £1590 per household. If Kirklees was funded to the level enjoyed by the average council in England there would be £53 million MORE every year to spend on services.

This is not fair on local residents of Kirklees who deserve a better deal from the Government.