Liberal Democrat Prospective Parliamentary Candidate Cahal Burke has marked Europe Day today by calling on voters in Colne Valley to support the Lib Dems in standing up to Theresa May's plans for a hard, destructive Brexit. 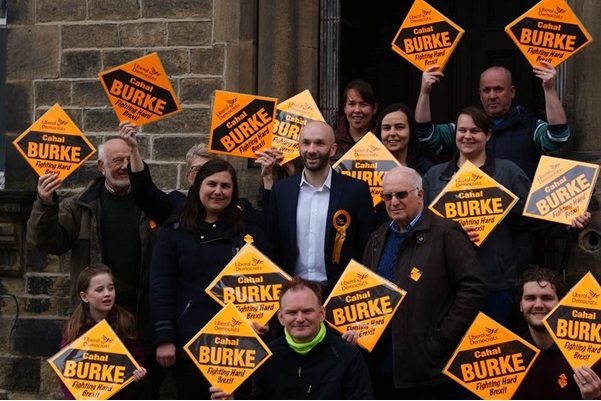 Cahal Burke said:
"On Europe Day it is important to remember that the EU was created to end centuries of war in Europe and bring prosperity to all European countries.
"It is clear that Theresa May is willing to scrap a free trade deal with the rest of Europe in order to pander to UKIP and the far-right of her own party.
"Nobody knows what Brexit will look like. The choices Theresa May will make will affect Colne Valley and our country for decades – that’s your job, your weekly shop, your environment, your safety, where you can travel to and where you can live.
"If you want a strong opposition in Colne Valley, fighting for an open, tolerant and united Britain, this is your chance. Only a vote for the Liberal Democrats can change Britain’s future."

Responding to comments made by Jeremy Corbyn that Brexit had been "settled", leader of the Liberal Democrats, Tim Farron said:
"Corbyn made his party vote in Parliament with the Conservatives on Brexit, and now he is joining Theresa May in denying the British people a final say on the Brexit deal.
"Be in no doubt, if you are worried about Theresa May’s plans for a hard, destructive Brexit, and if you do not want to see our country ripped from the Single Market with the futures of millions of EU citizens put at risk, the Lib Dems are the only party which is fighting for you."